Go To Sleep Boys (Read: Go to sleep, boys!) is an illustration project of male erotica, in which  the figures of sleeping naked men overlap to interact erotically with each other and create a stained-glass effect with their bodies, limbs and genitalia. The project consists of a set of illustrations, exploring the ideas of nudity, intimacy and sex in the context of sleep.

In Go To Sleep Boys (GTSB), our well-grown characters cannot get to sleep and have fun instead. The effects of “la petite mort” or little death are a good way to relax and sleep after.

The figure’s names are based on Hypnos, the Greek god of Sleep, and his sons: Morpheus, Phantasos, Oneiros, Phobetor and Ikelos. You can find the meaning of their names below:

One of the reasons why I wanted to make a project related to sleep is because I think it’s a very important part for our life and health, just like sex. Sometimes the lack of sleep can cause serious problems and sex and nudity can help to recover our sleeping cycles.

Probably sleeping naked is the first symptom of being an inborn naturist. As a naturist, I love sleeping naked and many studies suggest the benefits of such practice. Among others, to sleep naked with your partner reinforce intimacy and enhance sexuality, thanks to the release of oxytocin caused by the direct skin-to-skin contact between adults.

Insomnia is the lack of sleep and I have had insomnia to a certain extent since I was a very young man. I dislike taking sleeping pills —which I’ve done several times— because I don’t want to become dependent on them. I always try to set a routine to get my sleep back but it is easily disturbed, e.g.  with going out, staying up a bit later than usual, stress or other emotional states. Insomnia is a real problem for your health and affects many people nowadays due to the exposure to bright light screens, among other causes.

The traditional approach on erotica is based on hiding what is obvious. However, I like the idea of disclosing what is supposed to be hidden or unknown, as a visual present for the observer.

On this project, I continue developing the technique of layers for the composition of the scenes. I overlapped the figures resulting in a new range of colour hues and values, like a stained glass.

I wanted to give to this illustrations a sense of atemporality, where past, present and future happen simultaneously. In fact, you can read these illustrations in 3 different ways:

During the development of Go To Sleep Boy, a new discovery for me is the visual interest of body hair. Many people have a strong opinion or preference about others’ body hair but honestly I bet for self confidence and body empowerment. I usually like the body hair that each person decides to “wear”. Typically people think that naturists don’t groom their body hair as part of living “au naturel” but that isn’t true. In a naked body, the body hair is the last layer that protects and/or connects us to nature. 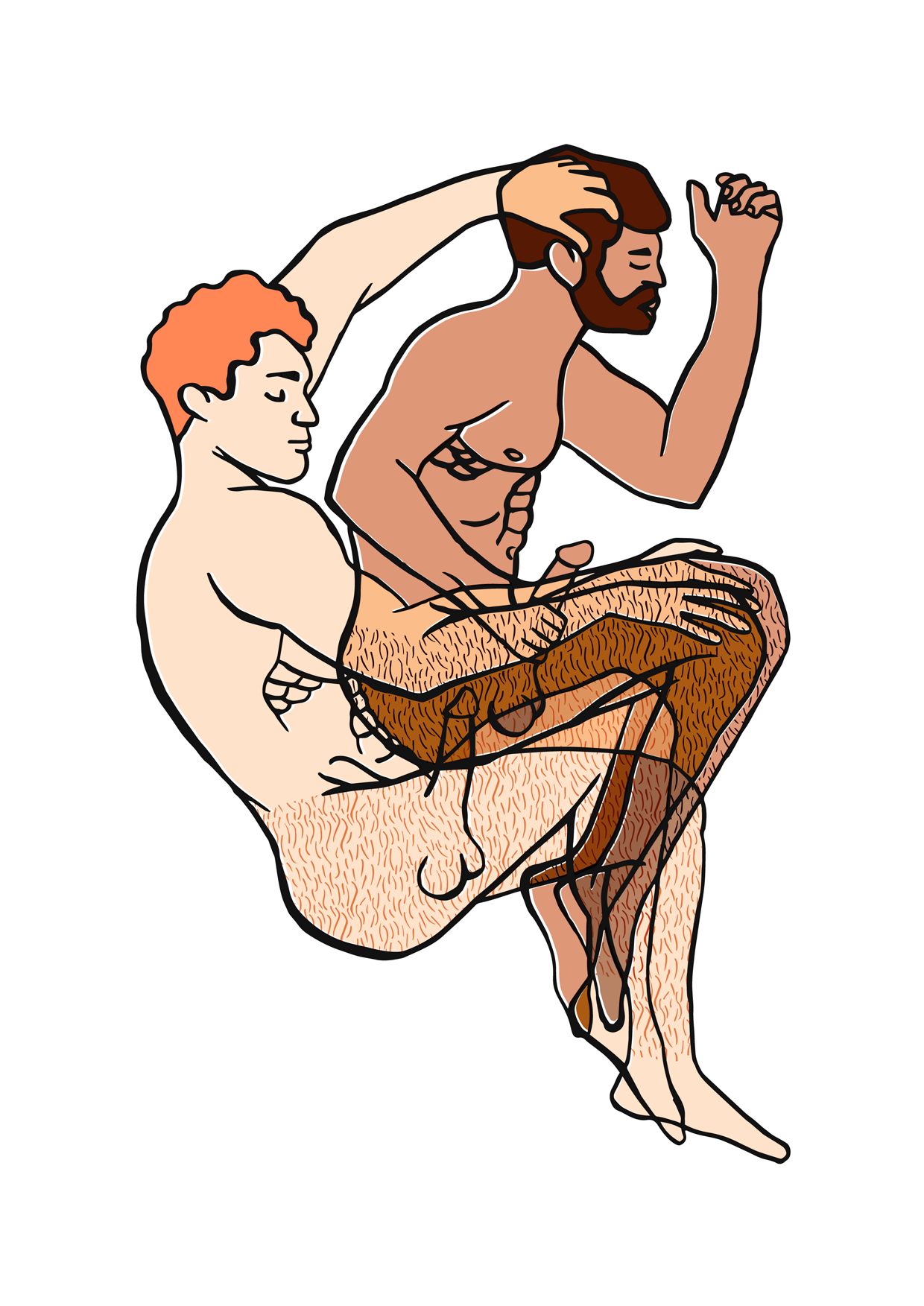 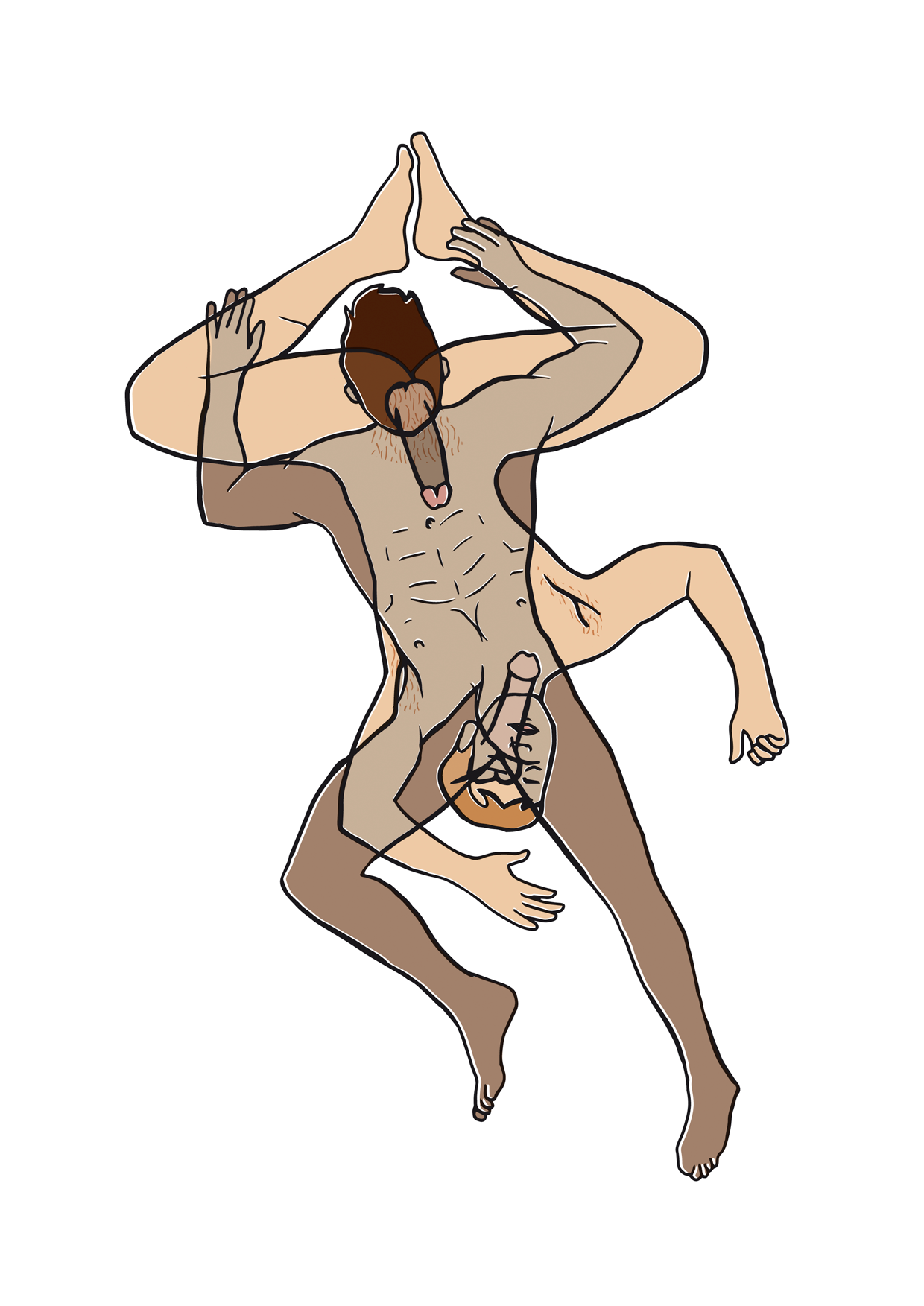 At the beginning of this project, there is a set of only 3 illustrations. There might be more in the future, considering the sons of Hypnos, the Oneiroi, are more than one thousand, according to the Ancient Greeks.

👱🏼‍♂️👨‍❤️‍👨👨🏾Phantasos & Oneiros. Their names are inspired by two sons of Greek god Hypnos. Phantasos means ‘phantasm’ and Oneiros means ‘dream’. Thanks to them we have words like phantasmagoric (dreamlike, as a fantasy) or oneiric (related to dreams).

🧔🏽Hypnos. Named after the Greek god, it means ‘sleep’. His twin brother is Thanatos (Peaceful Death), which means that the ‘little death’ is related to him. The little death is the sensation after the orgasm, a state resembling death.
.
Visit marlonlorenty.com for more information and see the full images before being posted on @marlon.lorenty. Prints available soon.
—
Portfolio: marlonlorenty.com
Online shop: marlonlorenty.redbubble.com

🔞😴😴 Go To Sleep Boys (Read: Go to sleep, boys! Swipe to see uncensored version and sketches). Sleeping naked men overlap to interact erotically with each other and create a stained-glass effect. With this project I’m exploring the ideas of nudity, intimacy and sex in the context of sleep. #GTSB .
🖼 Morpheus & Hypnos. Visit marlonlorenty.com for more information and see the full images before being posted on @marlon.lorenty. Prints available soon.
—
Portfolio: marlonlorenty.com
Online shop: marlonlorenty.redbubble.com

👨🏻‍🦰 Morpheus. It means ‘shape’. He sleeps naked and sometimes he has wet dreams, specially when Hypnos (sleep) is there. Here you have a couple of sketches for the design of this character. .
Visit marlonlorenty.com for more information and see the full images before being posted on @marlon.lorenty. Prints available soon.
—
Portfolio: marlonlorenty.com
Online shop: marlonlorenty.redbubble.com

😴😴 Go To Sleep Boys (Read: Go to sleep, boys!). Sleeping naked men overlap to interact erotically with each other and create a stained-glass effect. With this project I’m exploring the ideas of nudity, intimacy and sex in the context of sleep. #GTSB .